My good friend, Stephen Leigh, is on the promoted book shelf at Forbidden Planet in London.

Happy Holidays! I hope they were was as warm and fuzzy as mine were!

Sharknado; The North Pole: In the third installment of the movie series, a sharknado hits the North Pole, and sharks start snacking on elf appetizers. That is until Santa and his flying reindeer go into action. Santa has a chainsaw and Prancer has sharpened his antlers. It’s a gore fest galore, but red is a Christmas color right? And who cares if tornados don’t occur at the North Pole? When has science actually stopped SyFy in making a program?

We Wish You a Cthulu Christmas: Oops. Someone has replaced the hymnals at Midnight Mass and instead of singing “Silent Night,” the choir summoned the Old Ones! It’s going to be a primeval Christmas!

A WB Crossover Christmas: Arrow and the Flash against Captain Cold! Once they defeat the evil doer, they use the cold gun to bring a white Christmas to Central City. All is merry and bright until Arrow puts a shaft through Rudolph after mistaking him for a laser-nosed meta-human.

The semester’s grading is finally done. Hermes was so helpful.

and the kitten gets treats.

I’ve been to sick to be clever so here are some more pics of the kitten. 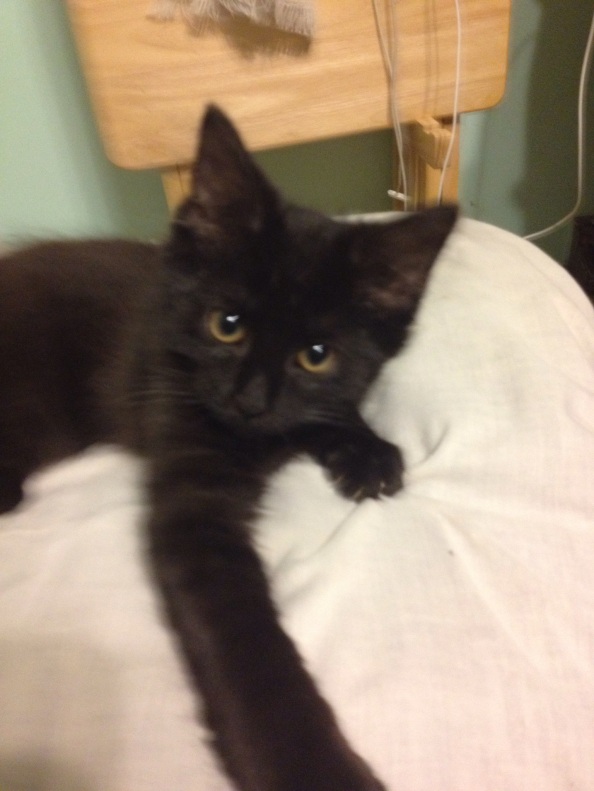